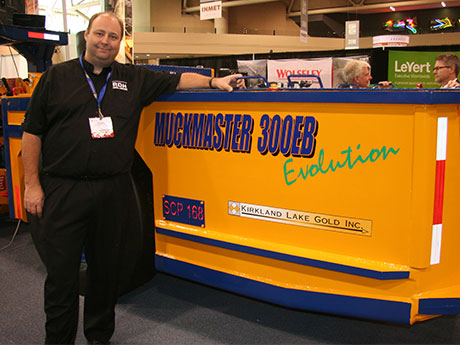 RDH Mining Equipment president Kevin Fitzsimmons with the battery-powered Muckmaster EB300 loader at the Canadian Institute of Mining and Metallurgy’s convention and trade show in May.

RDH Mining Equipment has unveiled what is likely the first battery-powered load-haul-dump (LHD) machine for the underground mining market.

Several years in development, the three-yard Muckmaster EB300 was showcased at the Canadian Institute of Mining and Metallurgy’s (CIM) 2013 convention and trade show in May.

“Our COO, Mark Tessier, felt the technology was pretty mature, that we weren’t going too far out on the limb and that the rewards would be huge,” he said.

It was a long process, recalled RDH president Kevin Fitzsimmons.

“The prototype went on surface first and they got all of their operators to try it. Then it came back and we were asked to make some tweaks to it. It went to their health and safety committee, the Ministry of Labour was there… there were a lot of steps before it went underground in May 2012.”

Government regulations require 100 cfm of ventilation per horsepower for diesel equipment. Battery powered machines, however, have no emissions and aren’t subject to the same requirement.

The equipment is powered by lithiumiron-phosphate batteries, which deliver four hours of service – one hour more than is actually required.

“When they’re done with it, they drive it away and plug it in,” said Fitzsimmons. The truck delivers two hours of service on a 20 per cent grade, after which, “they swap out the pack” and keep going. “The recharge time is 90 minutes, so after the two hours, the next battery pack is ready to go,” added Fitzsimmons. “It’s not like a lead acid battery where you have one on charge, one on the machine and one cooling down. These don’t need to be cooled down.”

The loader has more than enough power to dig into the muckpile, notes Fitzsimmons.

“When it first went underground at Kirkland Lake Gold, the guys were a bit skeptical. Now, the eldest of the muckers are racing to be the first one on them because they have no end of power, the heat is a lot less and they’re quiet.”

The credit goes to RDH founder, Rick Lemieux, who sold the company to son-in-law Fitzsimmons and three senior RDH employees two years ago.

“My father-in-law was a risk taker and it was his dream,” said Fitzsimmons. Also, “when you have a smaller company and you want to do a new project, it’s a lot easier. Bigger companies have so much red tape. I’ve talked to engineers from other companies who said they would have liked to do something like this, but they were told ‘No, we don’t have the budget.’”

Word is getting out about RDH’s breakthrough. Personnel from Goldcorp’s Red Lake operation have checked out the EB300 and liked what they saw, and Kirkland Lake Gold itself has given RDH an order for four more loaders.

“They’re very powerful units,” said Hinchcliffe. “We’re very happy with how they’re performing.” RDH has also had inquiries about six and 13-yard battery-powered loaders and is willing to scale up “if someone wanted to work with us,” said Fitzsimmons.